Kernel selection does not indicate which kernels are experimental

When install Manjaro Architect on a new system, I saw a dialog similar to this one (but with slightly different versions): 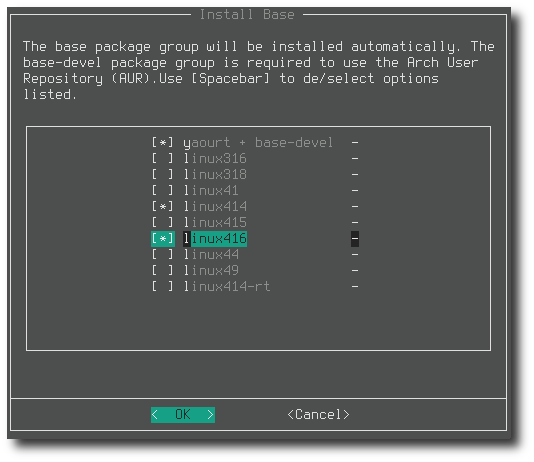 So not seeing any indication otherwise, I naively selected the highest kernel version thinking it was the most up-to-date. Little did I know that it was both a release candidate and experimental (a 4.19.0 RC). Once I booted up and started using it, it hung my machine at various common tasks. Only once I opened the kernel manager within manjaro-settings-manager did I realize that it was an experimental kernel.

It would be awesome if this dialog indicated which kernels were experimental, LTS, real-time (there is the -rt already), etc. Just like in manjaro-settings-manager's kernel manager.

That way, users would be less likely to inadvertently install a broken kernel or just the wrong kernel for their needs.

I know this is "Architect" and therefore for more advanced users. I've been using Linux since the 2.0 kernel days, and I still didn't know that linux419 was experimental.

I'm using manjaro-architect-17.1.11-stable-x86_64.iso. The screenshot above may not exactly correspond to that version, because the image is from this tutorial. But it is representative of what I saw.